7 Things to Read After The Chilling Adventures of Sabrina 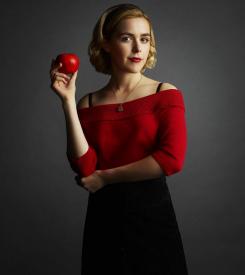 So if you’re like me and loved the Netflix show and/or comic of The Chilling Adventures of Sabrina, you’re bound to be looking for something to fill that void after watching or reading. Look no further than these awesome titles!

The Bone Witch by Rin Chupeco (TN CHU) may be a slower paced read, but the world building is so detailed it seems absolutely real, despite the magic that separates it from reality. As a bone witch, Tea wields very powerful death magic, making her an outcast, but her magic is necessary to keep dark forces at bay. As she gains power, she prepares to show the world what she’s really made of.

Labyrinth Lost by Zoraida Córdova (TN COR)  is rich with Latin American mythology and it’s the first book of an action-packed series! As the most powerful bruja in her family, Alex has a lot of magical potential, but when she performs a curse to get rid of her magic, it backfires and traps her family in purgatory. As much as she hates her magic, she must use it to save them with the help of her best friend and another brujo.

After moving back to her family’s hometown of Salem, Samantha Mather is met with immediate contempt from the locals because of her distant relation to Cotton Mather, one of those responsible for starting the Witch Trials. Because of that, her return triggers a generations-old curse. How to Hang a Witch by Adriana Mather (TN MAT) has everything you could possibly want from a witchy read - a ghost story, magical curses, and even romance.

Upon returning to her family’s home in Nigeria, Sunny is constantly bullied for not only being born in the US, but also because of her albino complexion. She couldn’t have imagined that the taunts calling her “half-ghost” could hold any truth, but as a descendant of a magical bloodline, Sunny finds out that she and three other kids have been chosen to stop a murderer who wields dark magic. Akata Witch by Nnedi Okorafor (Jh OKO) is an action-packed read that will keep you on the edge of your seat!

Toil and Trouble: 15 Tales of Women & Witchcraft is an audiobook that you can listen to on Hoopla consisting of 15 different short stories involving young witches who have much to learn about the price of magic. From stories of learning to accept yourself for who you are to breaking family curses as well as romantic and non-romantic stories, you’re sure to find something you enjoy!

Monstress by Marjorie Liu (GN LIU) is one of the most beautifully illustrated graphic novels I’ve ever read - with Asian and steampunk influences, the artwork is absolutely gorgeous. The story follows Maika Halfwolf, an Archanic on the run from human sorcerers that would consume her life force because of what she is. As if the threat of being dismembered and eaten weren’t enough, she discovers that she’s possessed by a demon that hides within her arm.

Both the book and the TV series of The Magicians by Lev Grossman (SF-F GRO/DVD MAG) are fantastic read and watch alikes for Sabrina. A brooding teen obsessed with the magical literary realm of Fillory (which is like Narnia) is offered a chance to enroll in a university for magic users, he’s excited to join, but the more he studies, the more he realizes that magic is just as boring to study as any other topic for the most part. At least until he and his friends discover that the realm of Fillory is, in fact, very real.