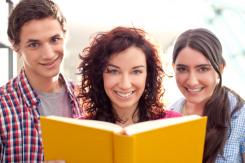 Summer Days and Summer Nights (TN SUM) is an anthology edited by Stephanie Perkins all about summer! With 12 popular authors like Leigh Bardugo, Veronica Roth, and Tim Federle all writing about summer, you can’t go wrong. From romance to fantasy and even some creepy horror, this anthology has all your summer reading bases covered.

I can’t get enough of the audiobook of The Poet X by Elizabeth Acevedo (Jh CD ACE), which is narrated by the author. If you’re a fan of slam poetry and fierce young women who are ready to take on the world, this one is for you. It’s about a teen girl coming to terms with how she is perceived by her peers and how much she detests the objectification of her body that she faces on a daily basis along with other very relatable issues that many young women face.

If you’re looking for something lighthearted but still realistic, Highly Illogical Behavior by John Corey Whaley (TN WHA) is one of my favorite books. Sol hasn’t left his house since having a massive panic attack three years ago, but when his mother connects him with Lisa, the two become fast friends, though she has some plans of her own to use his agoraphobia as the basis of her college entrance essay. The ethical dilemma becomes all too clear as the story progresses, but the characters’ personalities keep the story light despite the heavier topics.

Morgan Matson (TN MAT) writes fantastic summery reads that are perfect for taking to the beach or pool when you need something light, fluffy, and fun to read.Since You’ve Been Gone is one of my personal favorite summer reads and it’s about one quiet girl’s quest to complete all the tasks on the list her outgoing friend left for her to do over the summer. The Unexpected Everything includes everything from puppies to romance and even some political scandals nad is the perfect summer read if you like a meet cute kind of story. And in her most recent book, Save the Date, Charlie just wants one good weekend with her family before their family house sells and a big family wedding, though amidst the chaos, that seems more and more impossible.

The Strange Fascinations of Noah Hypnotik by David Arnold (TN ARN) is such a fun and unexpected read. It’s about a David Bowie fan, Noah, who gets hypnotized by a homeschooled kid and starts noticing odd changes in his life. Some of them even make him question his own sanity. This book has some unexpected twists that will keep you hooked!

In The Way You Make Me Feel by Maureen Goo (TN GOO), prankster Clara Shin loves disruption of any kind, but when one of her jokes goes too far, her dad makes her work on his food truck for the summer to learn responsibility. At first, it’s a drag and she longs for carefree days, but when she meets a cute boy and starts making friends with her classmate who’s working alongside her, she starts to think that it’s not so bad.

Proof of Forever by Lexa Hillyer (TN HIL) was such a fun summer read that reminded me a lot of an edgier, more modern Sisterhood of the Traveling Pants. When former best friends Zoe, Luce, Tali, and Joy recreate a two year old photo booth picture of themselves, they’re sent back in time to relive that summer, from the cringe-worthy to the romantic and everything in between.