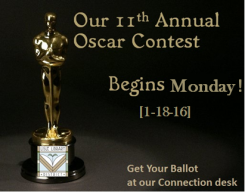 The nominations for the 88th Academy Awards were announced this morning! At Lisle Library that means it's time for our Oscar Contest as well!

Ballots will be available starting Monday, Jan. 18th.Guess the winners in 5 categories, and you could win one of our 5 Oscar contest prizes. The prize consists of: a bag of gourmet popcorn, a theater-sized chocolate bar, and an Oscar-nominated DVD from this year's group of nominees. (DVDs are awarded on a first-come, first-serve basis.)

And here are the nominees in the categories we use for our Pick The Oscar Winners contest at Lisle Library:

Performance by an actor in a leading role

• Matt Damon in "The Martian"

• Leonardo DiCaprio in "The Revenant"

• Eddie Redmayne in "The Danish Girl"

Performance by an actor in a supporting role

• Christian Bale in "The Big Short"

• Tom Hardy in "The Revenant"

• Mark Rylance in "Bridge of Spies"

Performance by an actress in a leading role

Performance by an actress in a supporting role

• Alicia Vikander in "The Danish Girl"

Best motion picture of the year

As we receive DVD and Blu Ray copies of these films, we will add links to our catalog for them in this post. Titles with links are in bold. (So far, we've only received Mad Max - Fury Road).