Our Take On: "The Adventures of Sherlock Holmes" 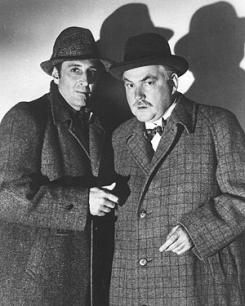 Last Monday JBF members donned their deerstalker caps, gripped their magnifying glasses, and followed In the Film Steps of Sherlock Holmes by seeing the first of our four films featuring Doyle’s immortal detective: The Adventures of Sherlock Holmes.

This film was the second of two major feature film releases starring Basil Rathbone & Nigel Bruce. These two were set during the time Sir Arthur Conan Doyle had written the stories. The first feature film was (The Hound of the Baskervilles.) It was interesting to note that while this film is called The Adventures of Sherlock Holmes, and the characters are played quite closely to Doyle’s text, the actual script has nothing to do with a particular story of Doyle’s – even though there is a noted collection of 12 Sherlock Holmes stories by Doyle that is called “The Adventures of Sherlock Holmes”! The further irony, is that this collection of Doyle’s short stories furnished the main plots for most of the later Sherlock Holmes movies filmed with Rathbone and Bruce! Such are the ways of Hollywood.

Members really enjoyed seeing Holmes portrayed so faithfully in Doyle’s style, while giving Basil Rathbone a chance to show off his mastery of disguise – and vaudeville music hall skills! – as well as Holmes well-known intellect, brusqueness, and crime-solving characteristics. (Side note: We had a picture of Holmes done by Sidney Paget (the original illustrator of Sherlock in The Strand magazine) that shows a close physical resemblance between Basil Rathbone and how Holmes was first seen by the public!)

While Nigel Bruce is far less the “bumbling” and ineffective cohort of Holmes that he becomes over the course of the later films, there are touches of it here. But we talked about how his performance as Watson is a big part of why these films are still so entertaining. He fulfills Watson’s most critical role in the stories: he humanizes the pair of them.

We also enjoyed the intricacies of the plot, and its dual crimes. Elements of the vengeance story was definitely culled from similar stories by Doyle. Some of the characters in this film continued as part of the later Holmes films “troop”, but a couple of the stars, were only in this film. Ida Lupino brought some star power to this film, although she was pretty young at the time. Alan Marshall had been a success in a previous “Thin Man” movie: After the Thin Man – in which he very believably played “a rotter”. Movie goers who had seen this film would find Ida Lupino’s doubts about him quite convincing! In our wrap-up members all expressed their enjoyment of this film as our series lead.

The release of this film, was sadly on the day that WWII commenced. Perhaps this is the reason that all of the other Sherlock films with Rathbone and Bruce are set in what would have been contemporary times (late 1930s into the 1940s). Many of them end with strongly patriotic statements being made by either Holmes or Watson, and often have “Buy War Bonds” ads at the end. Yet another way that we saw the influence of Sherlock Holmes continuing beyond his original publication.

This continuing influence is why our last theme of 2016 is In the Film Steps of Sherlock Holmes. We are going to be looking at the (very) different ways that the movies have portrayed Holmes over time. Next up is The Private Life of Sherlock Holmes – director Billy Wilder’s take on Sherlock Holmes during the highly Bond-influenced 60s, where he also features Doyle’s more minor character, Mycroft Holmes – Sherlock’s brilliant and reclusive brother. We’ll be following that, with a humorous take on the whole relationship between Holmes and Watson, in Without a Clue starring Michael Caine and Ben Kingsley. Our final Sherlock feature in December will be Mr. Holmes focusing on Holmes at the twilight of his career, & starring Ian McKellen.