Our Take On: "August Rush" 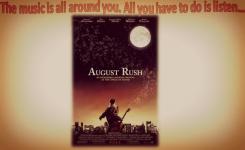 We began this month’s JBF viewings by finishing our theme “Recalling Robin Williams” with seeing August Rush.  It was a chance to again see Robin in a more serious light playing a role that was loosely based on Fagin from Dickens’ Oliver Twist. The whole story is based on this novel, and we were all very impressed with the acting skill of young Freddie Highmore, who plays the title role of August Rush/Evan Taylor. We could see why he was in such demand for the movie Finding Neverland, and was asked to be cast as Charlie in Charlie and the Chocolate Factory by Johnny Depp. August Rush is one of the films he did after the other two films.

We also talked at length about how the music creates or destroys the ties between various character – particularly between August and Wizard (Robin’s character). Wizard is the first person in Evan/August’s life who understands his deep connection to music, because Wizard feels the same way about it.

Unfortunately, Wizard ( for whatever reasons may exist in his background) also sees Evan/August as a money maker beyond what he can make with the other musically talented kids he has staying in the old theater with him. This leads Wizard to first, put the talented Arthur aside – simply because he’s not the musical genius that Evan is. Then he changes Evan’s name to August. He says this is to give Evan a stage name with style, but it also effectively makes any searchers looking for Evan have a much tougher time finding him. We loved the expression on Robin’s face the first time he sees Evan playing the guitar in his own unique way. It was the truest expression of his joy and connection with the boy and the pure joy he shows in finally getting a chance to put the sounds he hears into music. This also gave us a chance to see Robin in a supporting role that was crucial to the whole story. We felt he played it well: not overwhelming the other performers and still making his character stand out -- not easy for actors to do with cute child actors around them!

There was some discussion about how the way the characters come together could be seen as too far-fetched, but that Freddie Highmore does make a believer out of us as being completely believable as a musical prodigy. Patricia also suggested that this film seemed more oriented to magical realism (a theme we started exploring in the past year) than a straight drama.

In conclusion, group members were very happy to have seen this movie, and yet another side of Robin Williams. We will be meeting again this month for the next movie in our “Shot in Chicagoland” theme: The Blues Brothers – which celebrates its 35th anniversary this year. So join us on May 18th @ 6:00 p.m. in Meeting Room B to see this Chicago classic!

*NOTE: This meeting was moved up to accommodate the Memorial Day holiday.

The following links are courtesy of IMdB and Wikipedia:

The Director of August Rush is from Dublin Ireland, Kirsten Sheridan: