Our Take On: "Back to the Future" 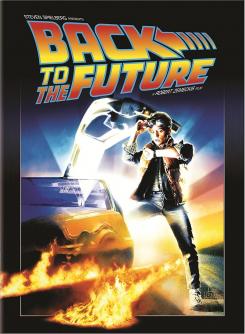 We were particularly amused to be watching Back to the Future as one of our 80’s films, as it now has two pasts: the one Marty experiences as his contemporary life time frame, and the mid-fifties high school years of his parents. The movie was originally released in 1985. We were surprised to learn that it had been turned down 44 times before it was taken on by Universal. Director Robert Zemeckis, had not had much success until he directed “Romancing the Stone”. Stephen Spielberg and Amblin’ Entertainment took on executive producer duties – and an American classic was made.

Members also talked about how this movie has had a huge influence not only on the careers of Michael J. Fox, Crispin Glover, and Christopher Lloyd, but our pop culture in general. Who hasn’t seen the DeLorean “time machine” or heard Huey Lewis’ unforgettable theme song and “The Power of Love”? We got a special kick out of the fact that is was Lewis’ cameo as the teacher who turns down Marty’s band for being “too loud”! The writer and director got a letter from John DeLorean thanking them for popularizing his car. We also laughed over the story on IMDb about just how popular a character Marty has been for Michael J. Fox:

“In 2010, during a cast reunion, Michael J. Fox said that strangers still call him "McFly!" constantly. Fox said that the most remarkable instance was when he was in a remote jungle in the South Asian country Bhutan, located between China and India in the eastern Himalayas. A group of Buddhist monks passed him and one of them looked at Fox and said, "Marty McFly!"

Even Ronald Regan (who loved the movie!) made reference to the film in his 1986 State of the Union address, "As they said in the film Back to the Future (1985), 'Where we're going, we don't need roads.'"

As with many sci-fi adventures, we had fun identifying things that have come to fruition in the 21st century and which “new” things from 1985 in the film that we now find “quaint”. In the end, we all felt that whether it is covering the future or the past, this film holds up, and was a pleasure to see again.