Our Take On: "Beat the Devil" 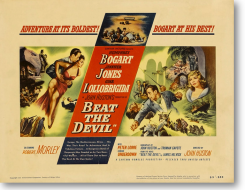 JBF closed out its look at the films of John Huston with one of his quirkiest – the tongue-in-cheek Beat the Devil from 1953. Starring Huston favorites Humphrey Bogart and Peter Lorre, it's Huston's chance to put the two rogues in a situation that's a play on The Maltest Falcon, Huston's first film starring the two. This time out, he also has splendid performances from Jennifer Jones (where we agreed she was almost unrecognizable) and Gina Lollobrigida, as well as supporting characters Edward Underdown (Jennifer Jones' stuffy British husband who is greatly attached to his hot water bottle), Robert Morely (who channels Sidney Greenstreet playing the lead villain Peterson), and Ivor Barnard (the menacing Major Jack).

We enjoyed all of their performances and definitely saw this film as a wonderfully satirical character study. Members also enjoyed the performances of the fateful ship Nyanga's Captain, Saro Urzi, and the car chasing chauffer, Juan de Landa. From the moment we meet these characters, it is clear that each is working hard to present a certain face to the world, which may or may not reflect who they really are.

Filmed in Ravello, Italy, we thought Huston's appreciative eye for his settings and the cultures in those settings added to the film. This came up several times: talking about the boys chasing the "beautiful car" on the narrow, mountainous road that runs along Amalfi coast; the oompah band's recurring theme music; the hot, dusty town square; tour that Bogart gives Jennifer Jones showcasing the surrounding area contributed greatly to the film's European feel. The script was adapted by Truman Capote, and we talked about some of the off-screen antics that Huston, Bogart, Lorre and Capote got up to. Reviewers of the time were not particularly taken with the film, but over time it has become a cult hit. We talked about how the cast's easy comradery and modernist views may just work better for current audiences than it did in the late '50s. Of all three Huston films we have seen however, our favoite is still The List of Adrian Messenger.

A piece of Bogey Trivia from this film!

In going over the information I'd gotten from IMdB for our discussion, I realized there was a particularly juicy factoid I didn't get to mention, so I'm sharing it here, courtesy of IMdB's site:

"Humphrey Bogart was involved in a serious automobile accident during production of this film, which knocked out several of his teeth and hindered his ability to speak. John Huston hired a young British actor noted for his mimicry skills to rerecord some of Bogart's spoken lines during post-production looping. Although it is undetectable when viewing the film today, it is Peter Sellers who provides Bogart's voice during some of the scenes in this movie."

Proof once again, that Bogart stayed tough to the end.