Our Take On: "Blazing Saddles" 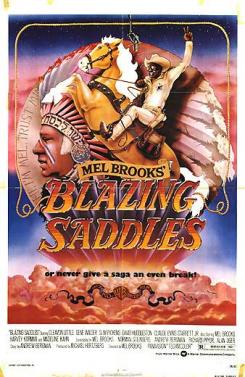 Blazing Saddles, our last Range on the Western feature, ensured that we were teary with laughter as we rode off into the sunset. We had picked this film, not only because it is a hilarious send-up of the Western, but as our tribute to comic genius Gene Wilder. We talked about the fact that while some of the jokes were coarse, and there’s outright spoofing of Western tropes, none of it is mean-spirited. In fact we thought it showed a lot of sweetness and appreciation for the Western. We also talked about how Blazing Saddles was Madeline Kahn’s first outing with Mel Brooks as a director – and she found it a bit overwhelming at first, because she was actually a very shy person. He wanted to see her legs to see if she could compare to Marlene Dietrich’s famous gams.

Forbes had an article recounting this story from Mel Brooks:

I tell her I’ve written this kind of Marlene Dietrich parody, this little song called “I’m Tired.” And she loves that song – she think it’s so great. She goes, “I can’t wait to do it.” I say, “There’s one thing – raise your skirt. I’d love to see your legs.” So her jaw drops, and she’s so disappointed; she goes, “Oh, this turned out to be one of those.” I said, “No, no, I’m very happily married. Remember I’m doing Dietrich and kind of doing Destry Rides Again? You gotta straddle a chair, and I need to see some beautiful gams.” She goes, “sure, sure!” She grabs the chair and straddles it and show me her legs, and everything is perfect. But she had this terrible, disappointing moment, another director who just wants to get her on the casting couch. But it didn’t turn out that way at all. And she was just great in the movie.

Both Kahn and Wilder also filmed Brooks’ take on monsters with Young Frankenstein in the same year as Blazing Saddles. We talked about how hilarious it must have been to be doing these two films – and how exhausting! We explored each other’s take on whether or not some of the jokes would be found too politically incorrect today while at the same time, how hard it has gotten to get a genuinely funny movie (humorous without meanness) in theaters today. We thought this might be an idea to explore in a future round of JBF movies!