Our Take On: "Crazy Rich Asians" 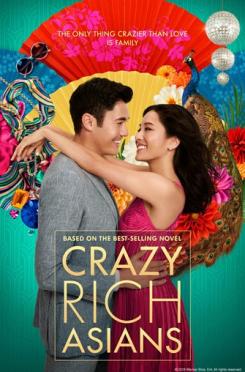 Just Between Frames journeyed to Singapore as we followed the travails and triumphs of Rachel Chu, the film’s Asian-American heroine, and Nick Young, her Singaporean, British-accented boyfriend in Crazy Rich Asians. Nathan has been hiding a large secret from Rachel: he’s the son of an immensely wealthy and influential Singaporean billionaire; and his family, particularly his mother Eleanor, is fully aware of both their social and financial worth. One character likens their background to their having found the Singapore equivalent of Plymouth Rock. Rachel, on the other hand, is the daughter of a single mother who works as a real estate agent in NYC and struggled to raise Rachel by herself. Rachel is an American success story in that she’s graduated with honors in economics, and is a professor at NYU. Unfortunately her passion for her work as well as her family background work against her in Eleanor’s opinion.

We talked about the kinds of cultural and generational struggles depicted in the film, and one member summed it up well in that we found that one could take all of the issues presented, and have a cast of many other ethnic backgrounds, and the film would still work. We felt that the reason the film appeals to so many American and English audiences, is this wonderful universality that was engaging to see play out with a totally different cultural group.

While this was true, we also talked about how native Singapore and Chinese audiences have not been altogether pleased with the film. There are reports that it didn’t show enough of the real Singapore, the cast did not have enough ethnically Chinese actors playing the parts, and that actors should have been speaking Singaporean English instead of American or British English. Members could see their points of view, but we also felt that too, was (somewhat ironically) true of how most audiences felt in seeing themselves portrayed by Hollywood’s version of themselves instead of the real thing. We also felt that the story, as written by Kevin Kwan, had to be at least realistic in part, because he himself comes from a rich Asian background.

We also highly enjoyed the parts that were played for laughs, especially Awkwafina’s Peik Lin Goh who played Rachel’s college BFF and her facetious facts of crazy rich Asian life, her larger than life father played by veteran actor Ken Jeong, and the Young family’s fashionista cousin, played by Nico Santos. Other members were impressed with just how beautifully is was filmed and the mind-boggling displays of wealth in the wedding scene, and the triple-hotel reception at the end of the film. Along with our popcorn, Fortune cookies and Billionaire sun cakes, we had a delicious time exploring this part of the film world.