Our Take On: "The Day of the Jackal" 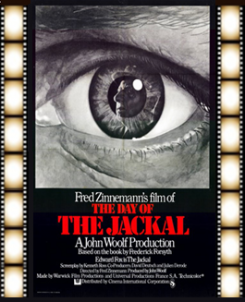 JBF members “leaped” into action Monday night to see the action-filled movie The Day of the Jackal, the second film in our “3rd Generation: from Book-to-Film-to-Remake” series. Once again, we saw the original film, which had a far better reception among reviewers (such as Roger Ebert; see links below). This movie was an early adapter of the suspense built by using a semi-documentary style to illustrate the cat and mouse game “the Jackal” is playing with the French police.

We all admired how Edward Fox played the lead role of “the Jackal”. He was center-stage for literally the whole of the movie, and he was fascinating to watch. His complete lack of a moral center was chilling, and his planning showed intelligence and cunning. As his counterpart, we also really enjoyed the performance by Michael Lonsdale as Inspector Lebel. His unflappable, calm, demeanor belied his intense and scrupulous attention to any detail that might help them catch the Jackal before he can assassinate President Charles de Gaulle.  It was also fun to see a young Derek Jacobi acting as his right-hand man in this investigation.

Information on the book and its author, Frederick Forsyth, was shared prior to the movie. A highly interesting character himself, “The Day of the Jackal” was his first novel. An author, journalist, spy and the youngest pilot in the RAF, he wrote his novel the old-fashioned way – on a typewriter. He supported a motion to impeach British Prime Minister Tony Blair after the war "Operation Iraqi Freedom" and was awarded the CBE (Commander of the Order of the British Empire) in 1997. His early career was spent covering French affairs and the attempted assassination of Charles de Gaulle. In 1969 he decided to use his experience as a Reuter’s reporter in France as the basis for a thriller. Within 35 day he'd completed The Day of the Jackal, which established him as one of the world's leading thriller writers. In 1972, it won the Edgar Allan Poe award for Best Novel, from the Mystery Writers of America. -- And by strange coincidence, (influenced by Just Between Frames perhaps?!) he's up for another Edgar award this year in the category of Best Critical/Biographical for:

The Outsider - My Life in Intrigue by Frederick Forsyth -- which we have here at Lisle Library!! Click here to go to our catalog and reserve it for yourself!

Undoubtedly an outspoken individual, we all chuckled over the following quote from him on IMDb: “I have yet to be convinced that the film business is a profession for adults.” We speculated on what he’d think of a film club discussing this film, and decided that the film group was definitely suitable for adults – whatever Mr. Forsyth might say!

Click on the titles here, to go to links to Roger Ebert’s reviews of The Day of the Jackal and its (loose) remake: The Jackal with Bruce Willis and Richard Gere.

Click here to go to IMDb's listing for The Day of the Jackal's cast, etc.