Our Take On: "It Happened One Night" 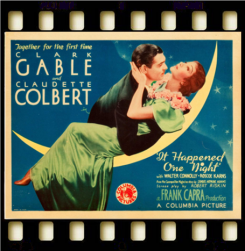 It happened on Monday, Oct. 26th that JBF saw and talked about the most iconic of screwball comedies: It Happened One Night. The fact the film stars Clark Gable and Claudette Colbert, is a story in itself. At the time Frank Capra was working for Harry Cohn in “Poverty Row” where Columbia Pictures was attempting to compete with MGM and others. At the time, if studios had a beef with one of their actors, and they weren’t needed for a studio picture, they would farm them out to “Poverty Row” where Cohn was delighted to take them up on it – and send them on to Frank Capra. Capra was having increasing success as a director. In 1938 he won Best Director at the Academy Awards for the third time, and his movie You Can’t Take It With You, was voted Best Picture. Almost in spite of themselves, Gable and Colbert won the 1939 Oscars for Best Actor and Best Actress. Colbert had been so convinced she’d been in a flop, that she was on her way to the airport for a vacation when word reached her she’d won, and she rushed into the banquet to give her acceptance speech, in a two piece suit!

That crazy things would happen involving this picture was completely understandable to JBF members who came to see the film. The plot, involving Peter, a wise guy news reporter (Gable) falling into the story of the decade when Ellie, a spoiled heiress (Colbert), runs away from her father to join her (in name only) husband. Her father had kidnapped her on his yacht (which she dives off from) in hopes of getting her agreement to annul the marriage to playboy aviator King Westley. As he helps her to travel back to New York (first by bus, and then by hitchhiking) their battle of witticisms turns to affection, and then unexpectedly to love. Capra, in keeping with screwball comedy traditions, wraps this battle of the sexes and modern (1930s) marriage into a look at the social values of the rich and the average Joe. Both have lessons to learn from each other, but the bulk of it falls squarely on Ellie and her father, rather than Peter.

There are so many classic scenes in this movie: Colbert’s take on how to hitchhike, Gable’s lesson on how men undress for bed (that legend says led to a deep loss in the sale of undershirts that year!) and the tumbling of the Wall of Jericho. These are only a few highlights, and we talked about many other favorite moments. We all found we’d formed a liking for Ellie’s father, and while we enjoyed the scenes and songs on the bus to New York (hard to dislike “The Man on the Flying Trapeze”!)  We agreed that the upswing in bus travel that occurred after the film came out, is not likely to happen these days.

In looking into the film’s background, we found we agreed with the concept that what Frank Capra does so exceedingly well, is to capture emotional realism – even in his screwball comedies. There are some scenes that resonated with all the members. One in particular, was the scene where Ellie forlornly eats a raw carrot because she is so very hungry – and there’s nothing else. We did, however, question the having Gable toss aside his cigarette when they were surrounded by piles of hay! Realistically – they should have gone up in smoke! We also commented on the scene where Peter’s editor has crumpled and trashed Peter’s story about Ellie falling for Peter. He throws it roughly away from himself, and then pauses. Then he pulls it back out of the trash. The camera cuts away as he sits there with a look of sympathy (for Peter) on his face.

JBF members have very much enjoyed our look at the Classic Screwball Comedies. Next month, we see what Billy Wilder was capable of in doing with a more modern screwball comedy, set in 1960s Cold War West Berlin.