Our Take: On "The List of Adrian Messenger" - JBF Discussion Summary 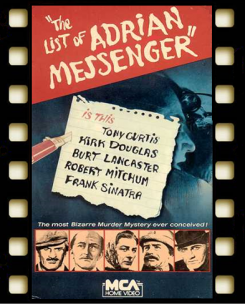 JBF members were treated this October to a lesser-known, but fascinating movie The List of Adrian Messenger as our first film directed by John Huston. It was filmed in 1963 during the last era of black and white films. Huston uses this brilliantly in the way the scenes are lighted and how this enhances the disguises members of the cast assume. Led by Kirk Douglas, and George C. Scott, these disguises add suspense and a sense of fun to this thriller. Huston enhances this further by enlisting some of the top actors of the time in disguised cameo roles.

The group had talked about this aspect at last month’s meeting where a member suggested that we have a chance to show each actor in the disguise, and see if we can tell who they are before playing the actual ending of the movie. There is a spot in the film where Kirk Douglas actually says “Stop!” so that he can reveal the players. We used that spot to stop the film, and Patricia held up 8X10 pictures of the actors so the group could try to guess who they were. The first correct answer got a movie candy prize, supplied by the member who suggested we try this. Despite many wrong guesses, this was a resounding success – and made the final reveal done in the movie itself that much more satisfying!

Filmed in Ireland, it is also a beautiful film, with justly famous hunting scenes in it. Huston and his children rode in real life, and the director pulled an “Alfred” and actually appears in one of the hunting scenes on horseback.

The style of the movie was unusual for a mystery/thriller. The first part of the story finds Scott and his French friend diligently working their way to figure out why Adrian is killed. It reaches the conclusion to the “whodunit” with roughly a third of the film still to go. At that point it turns into a deadly game of cat and mouse to see if they can prove who the killer is – and catch them in the act.

Members couldn’t get over how much they liked this movie and how little they’d ever heard of it prior to our showing of it. To a person, they recommend it highly for patrons to check out!