Our Take On: "The Man Who Shot Liberty Valance" 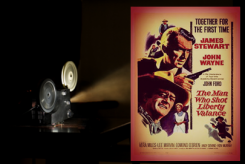 Our second Western could not be more different from the Gunfight at the OK Corral. Starring John Wayne and Jimmy Stewart, and a terrific supporting cast, The Man Who Shot Liberty Valance shows a very different type of West, and does it in black and white. Directed by the legendary John Ford, it shows his mastery of filming in black and white, and presenting an iconic Western landscape.

This feeling was strongly supported by Ford’s use of John Wayne in one of his best performances, as Tom Doniphon, a local horse breeder, who challenges lawyer Ransom Stoddard played brilliantly by Jimmy Stewart. There is also the matter of the main conflict between a particularly loathsome Lee Marvin, as Liberty Valance, and Stewart. We saw the conflict as not only one between an evil bully and a tenderfoot hero, but as a representation of the gun ruling the West and the power of the people coming together to make laws that would rule instead.

Yet another conflict was the romantic one between Wayne and Stewart as they both fall for Hallie, the spirited daughter of the local restaurant owners. There’s even a story thread about her foreign-born father becoming an American citizen expressly so he can vote out the oppressive rancher who employs Valance as his strong-armed thug.

We felt that even the song that was sung gave the film a fabled appeal honoring the Old West while becoming the new. At a number of points in the movie we found scenes where a character was either lamenting the changed times or challenging the movement towards settling the west. A time when the law of the land was loose at best, to one where the law mattered. We saw how the town prospered and how the coming of the train further sped its development and economy. Sadly, we also saw how the Tom, almost a legend in the past, has died barely remembered. His influence we thought lives on with both Ransom and Hallie (who puts a cactus flower plant on his grave like the one he’d long ago given her.) Ransom has to live with the ironic situation that forever bonds the two men. One that proved that the law of the gun kept him alive, and launched his highly successful political career.

We talked about how the film manages to not only cover these serious topics, but has humor, and emotional impact as well. We thoroughly enjoyed it, and thought it made a great transitional Western pick for the group.

To find the Cast & Director information we used click: