Our Take: On "The Night of the Iguana" - JBF Discussion Summary 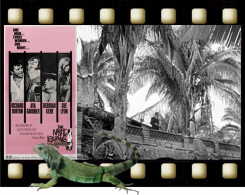 John Huston’s film The Night of the Iguana was our November feature in which he directed three of the era’s great actors: Richard Burton, Ava Gardner, and Deborah Kerr. We also found the performance by Burton’s main adversary, Grayson Hall playing Judith Fellowes, to be memorable and well-done. In fact, the group’s highest marks came for the caliber of the performances by all the main characters. We found it interesting that this was Sue Lyons’ follow-up to Lolita, playing the group member who can’t keep her hands off Burton. We talked about how the late 50’s to early 60s were a time where the idea of the “sex kitten” really took hold, with actresses like Ann-Margaret, and Brigitte Bardot. (They were a marked contrast to Twiggy and the late sixties!)

Given that Huston is known for his fascination with humanity, we could see where the studio let him spend the majority of his budget on getting the three main stars – keep the focus on their interactions to tell the story. As one member put it, it sure wasn’t an action film, there were no special effects, – but it sure held your attention! We also noted that there was an off-set human drama that occurred during the filming of this movie: Elizabeth Taylor was staying there and seeing Burton, even though both were married to other people at the time. The film – and the scandal – put Puerto Vallarta on the tourist map.

We talked about whether we thought Burton’s character, Rev. Dr. T. Lawrence Shannon, should have ended up with Deborah Kerr instead of Maxine. After some discussion we felt it could have gone either way – and even thought his budding relationship with Maxine could be a temporary, healing one for both of them. We definitely felt it would be worth going back a year from the ending and see what had developed. Getting this invested in the characters was seen as part of the great scripting and story-telling of the time.

Several people felt that this kind of movie would never have been made today; that a re-make would have to have more direct focus on sex scenes and violence, and would not allow characters to “talk so long”. This led to more discussion on how this is based on Tennessee Williams’ play, and that initially films of plays tended to be staged like filmed plays, rather than blending into the live sets more naturally. The advantage to filmed plays was keeping the primary focus on the performances by the actors, rather than having the actors be just a part of the story.

We felt it would be great if studios could make films that keep the strengths of great performances and storytelling at the center of the film while blending the other elements (background, special effects, etc.) into the impact of the total film. Barring that, members were glad that we had places like the film club to still explore on a large screen the gems of previous eras like this one.