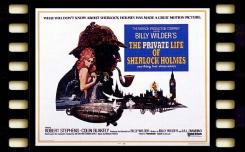 The Private Life of Sherlock Holmes shed light on aspects of Holmes that Wilder illuminates in an adventure that is in keeping with other Holmes adventures, but doesn’t shy from questioning either Holmes or Watson’s sexual orientation, or Holmes use of drugs. At the time this film was made, (1970) this was a particularly brave thing to do in telling a Sherlock Holmes story. We felt that Wilder handles these aspects with respect for the characters and in ways that helped move the plot.

Holmes uses the idea of a homosexual relationship with Watson, to deter a Russian ballerina determined to have Holmes father her child. Watson is forthright in his denunciation of Holmes use of drugs while acknowledging that his friend needs the distraction of a good case to fully occupy his mind – and leave no time or inclination for the seven percent solution. (They actually work in a couple jokes about whether or not Watson has been watering it down on Holmes.)

We liked both Robert Stephens as Holmes and Colin Blakely as Watson. Both presented that characters in ways that were consistent with the way Sir Arthur Conan Doyle wrote them, while adding some personal spin on the roles as well.  We talked about the fact that Stephens and actress Maggie Smith are the parents of actor Toby Stephens. Both Stephens and Blakely were very well known in England (& Blakely in Northern Ireland) for their stage performances. Before he died, Stephens received both the Olivier award in 1993 and was knighted in 1995.

We also really enjoyed Christopher Lee playing Mycroft Holmes. We felt he did a fine job presenting the character as not only an equal to Holmes, but possibly the smarter brother. One of the reasons we picked this film, was to have a chance to acknowledge Lee’s career after he passed away in 2015.

Actress Genevieve Page did a marvelous job playing Gabrielle Valladon. Her tragic widow was completely believable and we were all sorry to see her go at the end of the film. We especially liked the use of the parasol in providing Morse code for characters in the film. The film is known for its lush, and beautiful score, and we thought it did a great job underscoring the different scenes in the movie.

As for the script and direction, we agree with modern viewers of this film, that it is an important part of Billy Wilder’s body of films, and that it is a very enjoyable addition to the films about Sherlock Holmes. We look forward to our next venture in the “film steps” of Sherlock, by seeing something on Holmes lighter side: Without a Clue, which we will see next month on November 28th at 6:00 p.m. in Meeting Rm. B.