Our Take On: "Public Enemies" 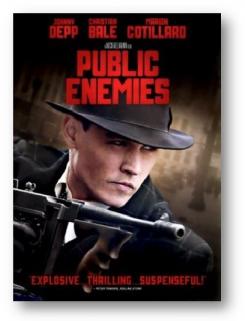 Despite the rain storms, a hearty band of JBF members (and two welcome newcomers!) came to see our final “Shot in Chicagoland” feature: Public Enemies. (A few of us came specifically to see Johnny Depp – but that’s another story!) Speaking of Johnny, we all agreed he gave a terrific, believable performance as the infamous John Dillinger. Some members mentioned that it seemed to be his last challenging role, and that we’d like to see him in something else that is as good as this film was.

In keeping with our theme, we talked about how cool it was to see the director use actual sites and buildings that were significant to the Dillinger story. While some were “shot in Chicago”, the film also used actual sites in Indiana and Wisconsin as well. The exterior of the real Biograph theater was used, as was Union Station, the forbidding 33-feet-tall concrete perimeter of Stateville Correctional Center at Crest Hill, southwest of Chicago, stood in for the  ‘Indiana State Penitentiary’, and Uptown, just along Lawrence from the Bridgeview Bank, you can find the nightclub in which Dillinger first meets Billie Frechette (Marion Cotillard) as the band plays Bye Bye Blackbird. It’s the Aragon Ballroom, 1106 West Lawrence Avenue at Winthrop Avenue.

Some of our group “spottings” were of the actual Crown Point Jail and our two newcomers shared details about Little Bohemia Lodge in Manitowish Waters, WI. They had been there while the filming of this movie took place, though sadly, they didn’t get to see Johnny Depp, they heard the gunshots going off for the big shoot-out scene. This was a famous gun battle with both Dillinger and Baby Face Nelson taking on Melvin Purvis (played by Christian Bale) and the G-men of the newly formed FBI. (Note: Nelson’s fate during this shoot-out was fictionalized.)

A couple of us had not been aware that Bale is not an American actor – his accent is that good. I shared a note from IMdB that in preparation for his role, Bale met with Purvis’s son Alton, and several close friends of the real Melvin Purvis to learn his attitudes, mannerisms, and speech patterns.  (This same note mentioned that Johnny Depp went to the John Dillinger Museum in Indiana and was allowed to read some of his letters. According to Depp in the DVD documentary, he even tried on the pants Dillinger wore the night he was shot. With a laugh, Depp says the pants fit him perfectly.)

Patricia shared a key point made by a user reviewer that the user’s grandfather’s reaction to the making of this film was – “Why? Why yet another movie about Dillinger? What can it add?” We took this as a discussion point, and felt that both Mann’s filming techniques (also explored in this review) plus the performance by Johnny Depp in particular gave viewers a fresh, less “glamorized” view of this icon of the gangster era. We also talked about the whole glamourous aspect of this era’s gangsters versus today’s pretty universal negative view of gangbangers. Ironically, many (as seen here with Depp’s Dillinger) were seen as the 1930s version of Robin Hood. The nation was going through the Depression so the fact that he wouldn’t take money from the average customer, but just what was in the vaults was seen as taking back from the enfranchised rich of the time. The whole scattershot violence practiced by gangbangers has no redeeming quality to it.

We also found the love story aspect to be both believable and humanizing. However, we also thought it showed just how deluded Dillinger was about what his future would hold and his ability to escape the police forever. We thought the scene with the racketeers manning the phones was a visually great way to show the coming age of “tech” based crimes where the profits were hugely greater than holding up banks. The distancing of the mob from people like Dillinger and Nelson caught the two without the support they relied on to keep evading justice.

We were curious about the eventual fate of Billie, and the notorious “woman in red” – who didn’t really wear a red dress, and wasn’t Dillinger’s girlfriend. Anna Sage (real name Ana Cumpanas) actually wore a white blouse with an orange skirt – as depicted in this film. According to IMdB, Ana collected a $5000 reward and was “duly deported back to Romania 21 months after the Biograph shooting”.

As for Billie Frechette (real name Mary Evelyn Frechette) IMdB says she “was actually married to one Welton Spark at the time of her relationship with John Dillinger. Her divorce from him wasn’t finalized until the early 1940’s. She later married a man named Wally Wilson, the name she took to the grave. Wilson dies unexpectedly, cause unknown, date unknown. Billie married Art Tic in 1965, a state game warden and barber from Shawano, Wisconsin. She died January 13, 1969 of mouth cancer. Mysteriously, her grave marker lists her name as Evelyn Tic (apparently against her wishes) and has the incorrect date of death as 1970.”

For the film itself, there are some great bonus features about the making of the film, the locations used, and the world of the era’s gangsters on the second DVD. Click here to go to the catalog and put a hold on it!

Public Enemies is a film adaptation of Bryan Burrough's Public Enemies: America's Greatest Crime Wave and the Birth of the FBI, 1933-34. Lisle Library owns this book, so click here if you want to go to a link to borrow it!

The Chicago Tribune has an interesting article "John Dillinger's Death" by Charles Leroux that goes into details about the shooting outside the Biograph Theater. Click here to go to it.

Other books/films owned by Lisle Library that may interest you are (click on titles to go to them in the catalog):

Dillinger – the 1973 feature film about him

Handsome Harry, or The Gangster’s True Confession by James Carlos Blake – a fictionalized account from the perspective of the Dillinger gang’s self-described leader, Harry Pierpont.

Other Dillinger/FBI links to check out:

The John Dillinger Museum is being moved to Crown Point! Click here to read the Tribune article on it.

The Little Bohemia Lodge, as noted by our attendees, is still around – and you can visit their restaurant! Click here to go to their website.

The Biograph Theater is now the Victory Gardens Theater which maintains its famous exterior – and infamous alley. Click here to go to their website.

On the G-men side of the web, the FBI no longer has a museum that the general public can go to – however! The wonderful Crime Museum in Washington, D.C. is a great stop on any trip to D.C., and they have all kinds of information about this era of gangsters. Click here to go to their website page on John Dillinger.

Our whole group was taken by one particular scene in the movie – the one where Dillinger escorts a young woman to get her waitress license… Waitress license?? None of us had ever heard of such a thing – however, here’s what I found on the net about wait staff and licensing as it stands today:

“If you work in a restaurant in Illinois and prepare, store, or serve food, handle food equipment, food utensils, or food-contact surfaces you must have a ANSI-accredited Food Handler certificate within 30 days of hire. This includes most restaurant jobs, including servers, chefs, head chefs, head cooks, cooks, bussers, bartenders, dishwashers, hosts, and hostesses who handle food and supervisors, such as the general manager or managers.” Source: the Illinois Restaurant Association website.

There is also information about having to have a license for handling liquor.

Unfortunately the only statement I’ve turned up so far on the historical end of this question, is a site that mentions you had to have official clearance from the city in order to work. If anyone else has better luck finding out about the history of waitress licenses, please let me know or post a comment here!

Here are quick links to wonderful IMdB's info on: