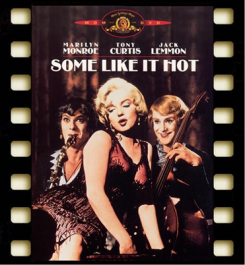 Just Between Frames began the school year -- by going back to the beach! There was a particularly frolicsome scene in this month’s feature, Some Like It Hot, with Jack Lemon (disguised as Daphne) giggling in the waves with the “other” girls from the all-female band he and Joe/Josephine (Tony Curtis) are in – hiding from big time gangsters. The 20’s never roared quite like this!

We kicked off our final theme for 2015: Classic & Contemporary Screwball Comedies with this Billy Wilder classic. Set in 1929, it features Curtis, Lemon, and Marilyn Monroe as the lead singer in the band. Curtis and Lemon are Joe and Jerry, musicians who’ve managed to witness the St. Valentine’s Day massacre. In the aftermath Jerry’s bass sports a bullet hole, and the boys are on a train bound for Miami with Sweet Sue’s band.

We talked about the basic elements of what a screwball comedy includes, and Some Like It Hot hits all the major marks: it offers fast, witty dialogue, two nutty battles of the sexes, “farcical situations, escapist themes, and plot lines involving courtship and marriage.” (Wikipedia on Screwball Comedies) This film comes up with these elements in spades. Wilder particularly has fun playing with the courtship and marriage aspect with the proposal offered by Joe E. Brown as rich older gentleman, Osgood Fielding III, to Jack Lemmon’s Daphne.  We also learned that before his death, in a 2002-03 United States national tour, Tony Curtis starred as Osgood Fielding, Jr. in a revised production, titled Some Like It Hot: The Musical. (Wikipeda)

On the gangster front, we talked about the St. Valentine’s Day massacre and how playing gangsters was a major part of George Raft’s career (here playing Spats Colombo). (The coin-tossing that’s done in the movie is actually a tribute to Raft, who was known for having done this in the movies.) In real life, he also was known to have a connection with Bugsy Siegel – they’d known each other since childhood, growing up in Hell’s Kitchen, NY.

Curtis also felt that Some Like It Hot was “perfect. Great dialogue. Crisp acting. Billy Wilder was brilliant, and Jack Lemmon and I always had a great time together; even though we were from different backgrounds – he was Harvard-educated, very intelligent and urbane. We balanced each other out.”

Lemmon worked frequently with Billy Wilder, and this time out, both were Oscar nominees: Lemmon for Best Actor, and Billy Wilder for Best Director.

Billy Wilder, one of America’s most respected directors, had fled to America to escape Hitler’s takeover of Germany. When he came here, he knew no English, he was a fast learner, and was helped by his apartment mate, Peter Lorre. By 1939, together with Charles Brackett, he was on a team responsible for Ninotchka among others. While many of Wilder’s films were caustic and cynical (Ace in the Hole) his comedies remained sublime. Some Like It Hot, is foremost among these, but The Apartment, The Seven Year Itch, Sabrina, and JBF’s own up-coming feature: One, Two, Three with Jimmy Cagney prove Wilder was not a one act phenomena.

All in all, the group felt this was a very worthy entry in the “Classic Screwball Comedies” part of our theme, and definitely worth seeing again!