Our Take On: Superheroes: A Never-Ending Battle 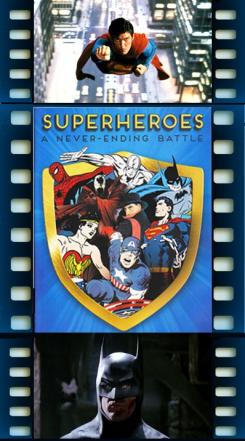 Presented as three “episodes”, the film was split into: Part 1 - Truth, Justice, and the American Way, Part 2 - Great Power, Great Responsibility, and Part 3: A Hero Can Be Anyone. We were very impressed with the degree of detail the filmmakers went to in exploring the roots of comic book history in Part 1. We also got a kick out of the fact that all of the major superheroes were created by writers and artists who were the minorities of the time: Jewish and Italian immigrants. This made sense to us, because those who are on the outside of a culture often yearn for someone who will stick up for them because the powers that be, do not seem inclined to do so. We were amazed with the amount of output these early comic book creators went through. Similar to the pulp fiction world, they only got paid by the frame (each scene on a page that’s in a different box) and they had insanely difficult deadlines as the demand for comic books grew. A number of interviewees talked about the sweatshop conditions they worked in – and how they still loved their jobs.

We talked about the ways the audience for comics shifted to include adults, and how – while significantly staffed by men – even in these early days, there were women working as artists and writers. Part one took us up through the war years Comic books in this period were one way Americans could escape from the Depression for a while. And, as stated in the film, “World War II creates a patriotic fervor for star-spangled adventurers to represent the American spirit at war and on the home front, but in the 1950s, superheroes are caught in the fire of government scrutiny and regulation.” Merchandising and experimenting with superhero TV shows rose as we headed into the 1960s.

Part 2, Great Power, Great Responsibility tracks the change mentioned at the end of part one, when greater political and social demands were made on what could or could not be suitable for publication in a comic book. The value of comic books themselves even came under fire. We found that to be understandable given the context that culturally we were entering into the Cold War era. The 60s affected the comic book world along with everything else in the country’s social/political/and bureaucratic mix. The Vietnam era found soldiers reading comics once again, but these comics were “reinvented with more complex characters and storytelling artistry.” The comics became experimental – both in the way they were drawn, and in the range of characters who were superheroes. Women and minorities started not only showing up in scenes of Superman, or Batman – they were starting to get their own comics. The group like Linda Carter’s commentary on her Wonder Woman years for both its thoughtful points, and the fun inside scoop she gave about how it was early days in special effects – so she had to hide the gadget they used to set off firecrackers when she used her bracelets! As always, Stan Lee shared fun facts and personal observations about superheroes then and now, and how science has learned a few things from comics as well.

Part 3: A Hero Can Be Anyone brings the history of superheroes up to date and we talked about the current trends and proliferation of superheroes present in TV, movies, video games and graphic novels – in addition to traditional comic books. The digital age may bring a close to printed comics someday, but most of the film’s experts say there is still a market for both paper comics, and especially artwork from comics. The newer creators are excited about the possibilities with online gaming, internet shows and, of course Comic Cons! In short, we see a bright future for superheroes in our culture.