Our Take On: "Superman: the Movie" 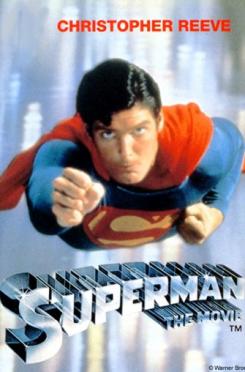 Just Between Frames took a nostalgic trip back in film history to see and talk about the first big comics-based blockbuster: Superman: the Movie. It hit theaters in December of 1978 – within a year of the first theatrical release of Star Wars. Now known as Star Wars Episode IV - A New Hope. It had simply been called Star Wars when first shown. We talked about how there are interesting connections between these two films.

First, the person who weight-trained Christopher Reeve to play Superman, was David Prowse – the man who played Darth Vader in the original trilogy. (Side note: Prowse had done professional bodybuilding and became friends with both Arnold Schwarzenegger and Lou Ferrigno, who at the time were not professional actors but rival competitors. ~IMDb) Then when Jerry Goldsmith had a schedule conflict, Star Wars composer John Williams eagerly stepped in to do the music for Superman. Being caught up in filming his own movie, and engaged in producing the full trilogy, George Lucas turned down the chance to direct Superman. We discussed how both the release of Star Wars and the huge amount of publicity and excitement that surrounded the release of Superman were critical to proving to Hollywood moguls that there was a fertile market for major releases of superhero movies. These early successes paved the way for both the DC and Marvel-based blockbusters we have today.

But there is something special about Superman. For most American youth he was the first and most important comic book hero they grew up with. We felt the director and crew of this film fully appreciated that – and honored its traditions with the initial black and white introduction and voice over by a child who is reading the comic, the radio montage that followed, and, most importantly in the way they presented Superman’s origin story, the inspired way Christopher Reeve played him, and the great cast supported the evocative feel of America in the 1950s – through 70s. While we acknowledged there’s a high degree of camp in there as well, it played out well against the very believable relationships Clark Kent and Superman has with both his adopted parents, and his attraction to Lois.

We had also shown this movie as a way to honor the fabulous actor, Gene Hackman, who set a very high bar for all Lex Luthors to come. January 30th will be his 90th birthday. We also enjoyed the chance to see once again, the incredibly beautiful photography done by legendary cinematographer, Geoffrey Unsworth, the person the film is dedicated to. Director Richard Donner was “disgusted that production designer John Barry and Unsworth received no recognition from the Academy for their work on this film” ~IMDb.

We had fun checking out the IMDb fun facts as to who else was considered for Superman and other parts. (Muhammad Ali, Burt Reynolds, Jon Voight, Dustin Hoffman [???!!!] and others for Superman. Carrie Fisher, Leslie Ann Warren, Stockard Channing etc. for Lois) One of the many things that made Christopher Reeve perfect for Superman, was that at the time he was also a licensed glider pilot, and was able to use those skills to make his flying more authentic.

We talked about how some of the effects were done, and appreciated the use of both state-of-the-art technology and classic effects work. The scene where you see Clark racing through the field to beat out the car with his high school classmates in it was one of those classic moments. In order to show the dust rising behind Clark, they had a motorcyclist drag a bag of dirt behind him. It created a single plume of dust for Clark, while the car had a heavier (four wheel) dust trail following it.

Lisle Library's next film event will be: Dinner & a Movie on February 14th at 6:30 p.m.–  a Valentine's Day showing of the Oscar nominated movie, Judy starring Renée Zellweger.

You must register for this event. See the Lisle Library Events calendar for details.