Our Take On: "Tulip Fever" 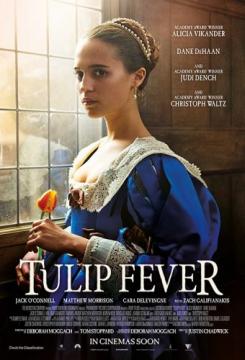 MAF members got a chance to travel to the Netherlands in medieval times when they came to see and discuss Tulip Fever this month.  Set in the 17th century, the plot involves the lives and loves of two classes of couples and how the tulip mania that took place at the time plays a pivotal role for them both.

While we had sympathy for the young illicit couple – particularly as the young woman, Sophia, was forced into her marriage to a wealthy, older man – we came to have possibly more sympathy for her husband, who sincerely loved Sophia, and would have sincerely loved her child. The young painter, we felt got in over his head when he falls in love with Sophia while painting her portrait.

The bulk of our sympathy however, went to the maid Maria and her lover, Willem the fishmonger. The craziness of the tulip trading reflected the craziness in their lives and fortunes. We talked about how we may find the people’s obsession with tulips to be incomprehensible, it became less so when we compared it to this era’s obsession with Beanie Babies, Cabbage Patch dolls, and “Tickle Me Elmo” among other things. We agreed that it’s always hard to understand someone else’s obsession, while we think ours are perfectly understandable!

We also enjoyed the abbess who clunks the painter when he attempts to steal a tulip from the abbey’s garden. It was yet another striking performance by the redoubtable Judi Dench.

Members also talked about the desperate conspiracy between Maria and Sophia, and the role both the culture of the times and the whole ironic misunderstanding led up to the events of the final scene. We appreciated that in the end, there were no “bad guys”, just imperfect people in a different, imperfect world.

Members also learned that we'll be seeing "Sideways" on June 24th since we couldn't see it in January.