Our Take On: "Without a Clue"; 3rd Feature in Our "Film Steps of Sherlock Holmes" series 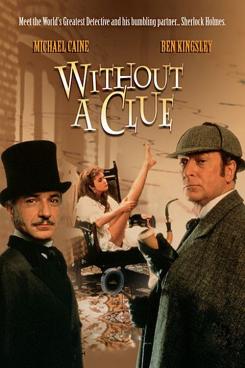 Without a doubt, this film provided the hoped for humor in looking at the “film steps” of Sherlock Holmes. Ben Kingsley as Doctor Watson, and Michael Caine as Reginald Kincaid, a. k. a., Sherlock Holmes have a field day with the basic premise that “Holmes” is a bumbling actor fronting Sherlock while really Doctor Watson is the brilliant sleuth.

We felt that both actors ably performed their roles as written, and that while everything is pretty much tongue in cheek, the growth of their mutual respect for each other is equally well-supported by the events that occur in the film – and that this aspect is one that led the group to rate it highly.

Members also liked the fact that the case they are on has the feel of a real Holmes mystery/adventure, that was somehow outrageously funny (outrageous to dedicated Holmes fans especially). The dialogue between Holmes and Watson is where much of the humor lies, in such lines as:

“Watson...there's an evil mastermind on the loose!”

“And my dear Holmes, there's an idiot on his trail!”

We liked the way that Holmes/Kincaid starts to overcome his foes when he uses skills he learned as an actor, rather than dumbly following Watson’s “scripts”. An example of this is when he is facing down Moriarty and can use his actor-swordplay to fend him off.

One member mentioned that they liked the tone of the film and the way its humor is not malicious or self-serving. It genuinely appreciates the Holmes world that Doyle created, and just has a bit of fun with it. We were stunned to learn that this was the last major Sherlock film until the Guy Ritchie film starring Robert Downey Jr. – 21 years later!

In all, we agreed that Without a Clue is a hidden-gem that film “Sherlocks” should hunt down and see!

Here's our link to Without a Clue cast and movie information on IMDb!