Our Take On: "Witness for the Prosecution" 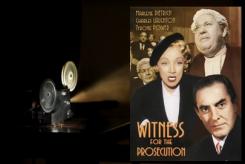 JBF began the fall with its first film in our series, “We Didn’t See It Coming” – films with famous twists! That film was the classic black and white version of Witness for the Prosecution, written by Agatha Christie, and acted to perfection by Marlene Dietrich, Charles Laughton, and Tyrone Power.

Originally a very successful screenplay (performed over 600 times in London), its screenplay was co-written by the film’s director, Billy Wilder. We learned that it is considered one of the Top Ten Courtroom Dramas of all time. We talked about how Wilder takes advantage of the movie setting by having scenes outside the courtroom that not only provide a different view, but give viewers a more in-depth look at the characters involved in the trial. We appreciated the style and wit of the barristers – and how simply and clearly Wilder informs us about the difference between a solicitor (who handles lower court civil cases) and a barrister (who handles high court cases including murder trials).

One part of this movie’s magic is that somehow, three infamously difficult people to work with: Charles Laughton, Marlene Dietrich and Billy Wilder became a mutual admiration society. IMDb relates this in its notes on the film:

“Charles Laughton, who could be moody and difficult, was apparently a dream to work with, throwing himself into the role with dedication and delight. Billy Wilder later recalled a day that was set aside just for shooting reaction shots of the jury and courtroom crowd (composed of extras hired only for the day). Normally, the assistant director would read the actors' lines and the extras would react. However, Laughton, who was fascinated with the whole process of filmmaking, begged to help. So he came in on his day off and read all of the off-camera speeches for the jury members. He read not only his part, but also the judge's, the prosecutor's and even Marlene Dietrich's. According to biographer Maurice Zolotow in his book "Billy Wilder in Hollywood", the author said, "it was an exhibition of craftsmanship such as Wilder had never seen. He believes that Charles Laughton had the greatest technical range and power of any actor, man or woman, whom he has known.”

Between Christie and Wilder, there are more twists to this tale than in a 12 foot pretzel – but the one(s) that come at the end are the most effective – especially if you haven’t seen the movie before. We talked about how the studio – worried about it being a success – added a special plea at the end of the movie asking theater-goers “Please don’t reveal the ending of tonight’s picture”. IMDb also shares these privacy concerns:

“During the filming they had an agreement hanging outside the door that everyone who came in had to sign, promising they would not reveal the surprise ending… The press book, reviews and various articles about the production stated that the principal cast members themselves did not even know the ending of the film until the last day of shooting, when the final ten pages of the script were presented to them…The film was shown in London for a Royal Command Performance, but beforehand the Royal Family had to promise not to reveal the surprise ending to anyone else.”

We believe this makes Witness for the Prosecution the Most Protected Famous Twist movie! And members are greatly looking forward to our next twisty film: The Shawshank Redemption!