Our Discussion On: "Snowblind" by Ragnar Jonasson 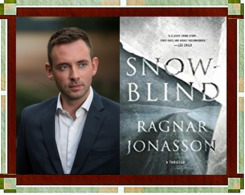 A large gathering of MAF members participated in the discussion on Snowblind. It was definitely one of those books that once read – you’re compelled to share; in particular, to find out what other readers have thought of it!

There was a lot to say about Karl, Pálmi, Hrólfur, and, of course, Ari Thór. We strongly agreed with Ari Thór that it was an injustice for Karl to escape retribution while Pálmi’s relatively small crime will likely be fully prosecuted. We also thought about whether Hrólfur’s decision to leave the rights to his book to Pálmi, was a positive or not. Overall the group did not see Hrólfur in any positive light, even though Ugla and Sandra both viewed him with affection.

We found Ari Thor’s relationships with women (particularly Kristen) lacking in both clear communications with each other, and immaturity in their responses to each other. As we also acknowledged how young they are. (Ari Thór is only 24.) His handling of some aspects of the case, as well as his relationship with Ugla also show his inexperience tripping him up.

There was no question of any kind of affection for Karl. His level of crimes and misdemeanors was undeniable and many of us have a hard time accepting the fact that he’s likely to get away with most of it. We even hoped that Ari Thór – or even Hlynur – will find a way to let Karl’s debtors know that he is now in Akureyri!

Throughout the discussion there was sympathetic laughter over our attempts to pronounce just about anything in this story correctly! The character names, locations, streets, etc. were challenging to this crowd of non-Icelandics! We agreed up front to refer to the main town as “Sig” instead of Siglufjordur, and tried to rise to the challenge of pronouncing the towns of Akureyri, and Patreksfjordur correctly. The ultimate challenge was to try to say the name of the two road tunnels connecting Olafsfjordur with Siglufjordur – it is called Héðinsfjarðargöng!

Pronunciation aside, we all found the setting to be one of the strongest parts of the story. Several members felt as claustrophobic about the blizzard as Ari Thór did. And many related to the contract between the urban terrain of Reykjavίk and the insular, closeness of Siglufjordur – and how this affected both Ari Thór as an outsider and the other characters, Tómas in particular, with their “insider” practices like not locking doors, or being willing to share personal details with outsiders – especially the police. Tomas’ often repeated statement the “nothing ever happens here” is as much a prayer as his blinder to the criminal activity in his town. We debated whether this could include his non-pursuit of the possibility that it was Hrólfur’s red Mercedes that killed Leifur’s older brother.

We felt that the pace of the story deeply accelerate over the last 50 pages or more, and that they contain a first-rate twist in one of the threads of the story. The shifts in time and the inclusion of the crime related in italics were confusing and left many of us uncertain why the author chose to write it this way.

We found that Jonasson, while potentially influenced by Agatha Christie to write mysteries, tends to leave a number of points open-ended: including whether or not one of the victims was murdered or not! He leads the reader in the direction of an answer – but doesn’t make that answer clear. The majority found that frustrating – but even if they’re not planning to read the next book, almost everyone wants to know what his next book or books might reveal. While his style of writing was in question, Jonasson’s strong writing and engaging characters were appreciated by the group.

Upcoming Book Discussion on "The Crossing Places" by Elly Griffiths

Join us on Thursday, January 20th to discuss The Crossing Places by Elly Griffiths. We will meet virtually through Zoom and the meeting will start at 6:00 p.m. This is  to accommodate Elly who will be joining us from Brighton, England!  If you have questions or would like to attend the discussion, please email Patricia Ruocco (ruoccop@liselibrary.org) Copies may be picked up in the building or via Curbside Pick-Up. Please check our catalog for availability or to place a hold.