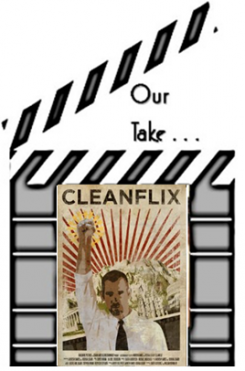 Just Between Frames met Sept. 29th to see the last in this year’s selection of documentaries: Cleanflix. In addition to fitting our documentary category, it tied in well with Banned Book Week, since it too deals with censorship.  In this case, however the censorship takes the form of “sanitizing” major Hollywood movies. The key people involved with developing the tool to edit these films, and those who set up video stores to sell and distribute them, are the focus of the film. Their perspective, is that they have a large audience (in Utah, particularly among members of the Church of Jesus Christ and Latter Day Saints) who don’t want to see excessive sex, gore, violence or swearing when watching a movie. This audience still wants to see popular films though, and keenly feel left out when others are discussing popular movies. The alternative is to only see “family” films which don’t really satisfy adults.

Arguing that the store has bought each copy of each film they edited, and that they had the right to do whatever they wanted with their purchased copy, Cleanflix was initially a single store/editing facility. Then it became so popular there were more stores, then franchises, even competitors. Around this time frame, Hollywood became aware of the situation, and started lawsuits against the company. When the law was upheld, the original Cleanflix folks, closed up shop. Others continued to sell (in stores and over the internet) believing it to be an act of civil disobedience.

They group empathized with their feelings, but felt that it was very clear that they did not have a right to take another person/group’s work and change it. We thought the one commentator for the studios was right to say that only the makers have the right to edit the final version of a film.

We also found it interesting that the studios would ignore this market, which the film clearly shows to exist, by not making the versions they make for TV, airlines and foreign countries available for sale to home viewers. One Amazon viewer put this point nicely. “Why would they not want to profit even further? Most of the major film studios already print a portion of their unreleased film catalog for single orders. If there's a movie that's not on DVD, one can purchase it directly from them over the internet. It is sent in the mail in a generic DVD case. This could easily be done with the TV Versions as well, and at $24.99 a pop (which is what the special order DVD costs), they could make off like bandits. Just like they do when they talk about their artistic integrity, then profit from censored music or allow a TV deal to be made on a censored cut of the film. If they truly had integrity there would be no TV cut for their R Rated films - they'd just take the cut in profits.”

*Note: In researching the film, I ran across a related comment about how the music industry does provide “clean” (Parental Advisory/Explicit Lyrics versions) and that music is made by subsidiaries of movie companies.

Altogether, the group felt this was a wonderful discussion film: thought-provoking and informative. We appreciated the twist in the events that unfolded when Daniel Dean Thompson, a major subject in the film, who passionately defended his mission to supply these edited movies, was found to have pornography in his back room, and he was arrested, along with a friend, for paying two 14 year-old girls to perform sex acts on them.

A final irony: the documentary itself contains scenes that would be considered off-limits by Cleanflix customers (in order to show the difference between edited and un-edited film sequences from major films). The producers of the documentary, have therefore added an edited version on the Cleanflix DVD.

Here is the promised movie review link to an interesting review of Cleanflix done be a Mormon studies roundtable: