Our Take On: "A Fish Called Wanda" 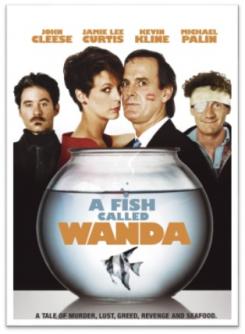 Just Between Frames members added to the holiday spirit by finishing our series of “(Modern) Screwball Comedies” with a 80’s classic: A Fish Called Wanda. Written by and starring John Cleese, the film garnered a Best Supporting Actor Oscar for Kevin Kline as Otto, the hysterically funny, psychotic gunman, and praise for Jamie Lee Curtis as Wanda and the unforgettable Michael Palin as K-K-K-Ken.

We reviewed our basic criteria for a screwball comedy and then talked about the ways that this film meets just about all the points raised in our Wikipedia article:

Characterized by a female that dominates the relationship with the male central character, whose masculinity is challenged

There’s no question that Jamie Lee Curtis’ Wanda is center stage and the attraction for just about all of the male characters. We felt she didn’t so much challenge attorney Archie’s (Cleese’s character) masculinity, as his spirit of adventure. Initially, we felt she viewed him pretty much the same way she did George (the leader of the diamond heist gang), Otto, and Ken – pawns to work her will on, through flirting and sex. Somewhere along the line though, she begins to fall for Archie as much as he has for her. (We felt the scene in the airport demonstrates her feelings for Archie. She has all she’s wanted and a passport to leave that’s been cleared, and still she takes the time to try to phone him to come too.)

Not only was the dialogue face-paced, the whole film flew by. One member commented that for as long as the running time was, he never felt like it was a long film. We also loved the whole Italian/Russian/French bits that drove Wanda wild – when all that Otto and Archie were doing was quoting menu items or famous author names, etc. not really speaking the languages. Otto, Archie, and Wanda’s exchanges all tended to be quick and full of zingers.

Unlike the older films we’ve seen, the verbal sparring was not the only source of sexual tension, as what can be seen on the screen has become much more permissive – and in this case, with very funny bed scenes.

Farcical situations (SPOILER ALERT on this!!)

Our favorite one was the dark humor of watching Ken try desperately to kill the old lady who could ID George as one of the diamond heist gang. He was such a devoted lover of animals, that when he’d end up killing one of her dogs instead of the old lady, it just about destroyed him.

This was kind of a given, since the gang wanted to flee the country after the heist, but there was also a sub-theme in which we get to see how desperately Archie really wants to flee from his whole life circumstances: his wife, their rigid, depressing marriage, his “uptight” career as a barrister, etc.

As mentioned, we could see the failure of Archie’s marriage as well as his growing affection and love for Wanda. Again Wanda’s sexual partnering with both George and Otto are key elements that heighten both the plot and the laughs.

All in all, A Fish Called Wanda was a holiday treat, hugely enjoyed.