Our Take On: "Groundhog Day" 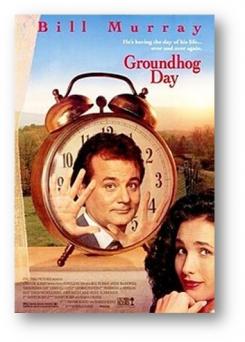 Just Between Frames (JBF) initiated our second theme of 2015, “Shot in Chicagoland”, with the Harold Ramis classic, Groundhog Day. Patricia shared a list of film locations used during the filming of Groundhog Day so members could look for them during the film. We talked about these and how having a major film that not only uses sites in the area, but stars at least three Chicago born actors, gives it a feeling of familiarity and community. We can all relate to what they are saying, how they are reacting, and it gives local viewers a sense of ownership that movies filmed elsewhere do not give.

We also talked about how you really can make a case for Groundhog Day as Harold Ramis’ best film. First, we loved the performances, especially Bill Murray’s, and that unlike the films he’d done to date, this film proves he has real acting chops. We felt that the script was outstanding: it was not only funny, but thought-provoking on some fairly deep philosophical issues. This piece of the discussion was born out by the featurette interview with Ramis where he talks about how people of different religious beliefs have all approached him or held events around the film and how it reflects the group’s belief in: purgatory, etc. Patricia mentioned that one reviewer also talk about how Groundhog Day relates to economics saying "In economic terms the final reliving of the day constitutes what economists refer to as a perfectly competitive equilibrium based on perfect information. ... In the hypothetical world of Phil Connors in Groundhog Day all of the parameters of the 'game' he is playing are reset back to their original position every night while he sleeps. In the real world there are no constants."

The group also talked about how well the film holds up over time. Patricia mentioned how reviewers and others have also said how their appreciation for the film actually has grown over time. (One of these reviewers stating this was Roger Ebert.)

We also talked about a classic Groundhog Day question: how many times do you think Phil lives the same day over? The group consensus was around 9 times – and they were astounded to learn that some guessers amongst reviewers and even cast put it at 10 years or more! We all agreed that when you look at all the accomplishments Phil accumulates by the end of the film (learning to play Rachmaninoff alone would have taken Phil a number of years) that 10 years is not so far off after all. One member commented that Phil is so dislikable at the start of the film he’d need at least that much time to truly change his perspective and behavior.

We also talked about how he handled the situation and felt that we relate to all the ways he approached it: getting angry or frustrated, taking advantage of it, and finally using it to better himself. Patricia told the group that the popularity of this film is taking yet another step: into a musical! Variety recently had an article about Groundhog Day coming to Broadway! Ending in the vein of what goes around comes around, we had a final laugh over the Washington Post reviewer who noted that “even though the film is a good Bill Murray vehicle, “Groundhog” will never be designated a national film treasure by the Library of Congress.” In 2006 the film was selected by the National Film Preservation Board for preservation in the Library of Congress.

Click here to go to IMdB’s entry on Groundhog Day and see the full cast list with links to the actors and more.

Join us next month when we'll be showing our last Robin Williams film, August Rush on May 4th @ 6:00 p.m. and on May 18th @ 6:00 p.m. for the next "Shot in Chicagoland" feature: The Blues Brothers -- which is celebrating it's 35th anniversary!

Thinking about how nice it would be to stay at the Cherry Street Inn from the movie? Well it is now the Royal Victorian Manor B&B! Click here for more information on it. Want to see which film locations in Chicagoland we found for the film? Click here. And how do the residents of Woodstock, Illinois keep Groundhog Day in their memories? Click here to learn about their yearly Groundhog Day festival held (when else) on Feb. 2nd!