Our Take On: Gunfight at the OK Corral 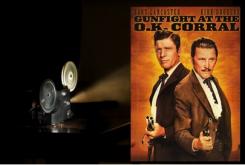 With our second western in our Range on the Western series, we saw a great representation of the classic western during the height of Western popularity in the 1950s. Gunfight at the OK Corral also featured Hollywood heavy-weights of the time: Burt Lancaster and Kirk Douglas in one of their most famous pairings on film. There was no denying that both exhibit strong charisma on the screen, and while many film fans have a tendency to think of them as a team, we found out that neither was too crazy about the other. There was a definite aspect of competitiveness with them, but they did show respect for each other.

We felt that the way this movie was filmed however, gave the lion’s share role to Kirk as the ailing, larger-than-life Doc Holliday. We were impressed by the way he used his voice and body to get across the deadly illness he was suffering from, while maintaining a believable presence as a force to be reckoned with. Lancaster, we felt, did a fine job with the thankless “straight man” role, embodying the upright, straight-arrow Wyatt Earp. We had fun talking about spotting both the young Dennis Hopper (who did a fine job with his poignant performance as the doomed teen, Billy Clayton, and Star Trek’s Doctor McCoy, DeForest Kelley as one of Lancaster’s brothers, Morgan Earp.

We could see how this film would have served a whole generation as almost a documentary of the famous OK Corral shoot-out, but we enjoyed talking about the actual historic event – which has significant differences: one being that the shoot-out didn’t actually happen at the OK Corral! (According to sources, it actually took place in a narrow lot on the side of C. S. Fly's Photographic Studio on Fremont Street, six doors west of the O.K. Corral's rear entrance.)

As far as our group was concerned, the film still achieved the goal of projecting a “legendary” feel to the audience that we think had made it remain popular with audiences of today.

To find the Cast and Director information we used click: