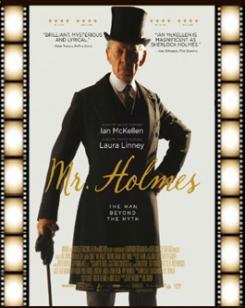 Starring Ian McKellen, Laura Linley, and a very talented young actor, Milo Parker, as Roger, Mr. Holmes portrays Holmes at the end of his career – with one more case to solve. A case he is having great difficulty trying to remember. The story is set in 1947, following a long-retired Holmes living in a Sussex village with his housekeeper (Linley) and her young son, Roger. He is trying to write his own Sherlock “story” recalling a troubling case he had nearly 30 years ago, involving an angry man and his distraught wife.

We found the filming of the story conveyed the different eras beautifully, and a great support to Holmes’ memories of the past and his “current” experiences set in 1947 at the age of 93. The puzzles to solve were both mental and emotional. We felt his sadness at the loss of his superior memory and cheered on his deductive reasoning which still existed and helped him to solve the case. We were thoroughly engrossed in the emotional journey in which both he and his housekeeper are at odds over her son’s hero-worshipping of Holmes and her sense that she is losing her son to him. This journey’s conclusion was particularly satisfying to the group. And we empathized with Holmes grief over a significant aspect of the case’s resolution.

We liked the part that dealt with Holmes’ trip to Japan to find a plant that he hopes will strengthen his memory. The experiences he has there and the imagery of life in Japan after Hiroshima, worked well with Holmes’ emotions as he realizes that his memory is failing, and he isn’t what he once was.

We loved Holmes' relationship with his young “Watson”—the housekeeper’s innately curious young son Roger. Holmes teaches Roger about beekeeping as well as how to use deductive reasoning, and Roger keeps Holmes on track and fans the flames of Holmes’ energy and will to succeed in bringing the case to its conclusion. That the relationship with both Roger and his mother has also reached a very different place with Holmes than where they began, also made the film a rewarding emotional journey for our group.

Directed by Bill Condon, Mr. Holmes is the second film in which he has directed Ian McKellen, who stared in Condon’s film Gods and Monsters. We were curious to note that Condon is also the director for the upcoming live action Beauty and the Beast. Truly he has a gift for larger-than-life characters!

Here's our link to Mr. Holmes cast and movie information on IMDb!