Our Take On: "Sleuth" 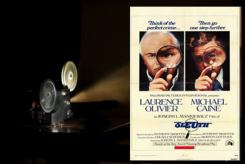 Just Between Frames finished 2017 with a flourish. And a lot of twists! Based on a highly lauded Broadway play, Sleuth offers a kind of film-making and viewer experience that is not often seen today. The scope is particularly tight since all the events of the film happen in or outside of Andrew Wyke’s eccentric mansion. Wyke, played perfectly by Sir Laurence Olivier, is an upper-class elitist convinced of his superiority in all matters criminal. He is a highly regarded and award-winning crime novelist and he has a unique offer for his wife’s lover and would-be second husband, half-breed hairdresser Milo Tindle.

Tindle also played brilliantly by Sir Michael Caine, is unabashedly working class and proud of his Italian roots. He understands exactly what Wyke thinks of him and – at least on the surface – doesn’t give a hoot. But he is quite interested in Wyke’s proposal that Tindle steal a collection of jewels from Wyke which Andrew can then claim the insurance money for. Tindle would then have the means to keep Wyke’s wife happy and Andrew wouldn’t lose anything on the deal.

It all seems perfectly straight-forward and clear. Nothing could be further than the truth. This is only the initial round in an increasingly tense and suspenseful “game” of cat and mouse between the two. We loved the way these twists played out and appreciated how the two men’s prejudices and class issues were illuminated by the games.

It was also something of a belayed recognition for us when we realized that the whole film features only these two actors. We didn’t miss the lack of players because their performances were so good, other characters would just have gotten in the way. One member did feel that the games went on too long – and we talked about how even the ending felt like there could still be another round to go – if all was not as it seemed.

Overall, however, the group loved the two performances by Olivier and Caine and fully supported the fact that both of them were nominated for Best Actor at the 1972 Academy Awards. We got a kick out of the fact that producers had listed other actors as having been in the film – all  these names were made up: Eve Channing (is a combination of "Eve Harrington" and "Margot Channing", the two main characters in Joseph L. Mankiewicz's All About Eve ), "Higgs" is the name of the dead body in Tom Stoppard's play "The Real Inspector Hound", a parody of Agatha Christie-type mysteries, and "Alec Cawthorne" is also the name of a film writer for the BBC.

The name Alec Cawthorne is virtually an anagram for "Or Michael Caine". To achieve the spelling, flip the 'W' in Cawthorne upside down to get the 'M' in Michael, and separate the horizontal and vertical lines in the letter 'T' to get the two 'I's needed... one in Michael and one in Caine. The rest of the letters fall naturally into place. **

We all agreed this film was the perfect note to end our theme with and our 2017 movie year.

**Potential Spoiler Alert!!!* This last point should be read after seeing the movie.

**This last character name was its own twist in more ways than one: Michael Caine is actually playing Alec Cawthorne’s role in the movie: Inspector Doppler. (Probably a further play on words for doppelganger!)