Our Discussion of Ancestral Night by Elizabeth Bear 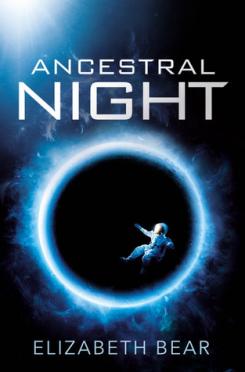 A routine salvage mission uncovers evidence of a terrible crime and relics of powerful ancient technology. Haimey and her small crew run afoul of pirates at the outer limits of the Milky Way, and find themselves on the run and in possession of universe-changing information.

When authorities prove corrupt, Haimey realizes that she is the only one who can protect her galaxy-spanning civilization from the implications of this ancient technology—and the revolutionaries who want to use it for terror and war. Her quest will take her careening from the event horizon of the supermassive black hole at the galaxy’s core to the infinite, empty spaces at its edge.

To save everything that matters, she will need to uncover the secrets of ancient intelligences lost to time—and her own lost secrets, which she will wish had remained hidden from her forever. Goodreads

*Per Theresa: Naomi Kritzer's 2017 pandemic short story "So Much Cooking" is free online, with link to audio version! http://clarkesworldmagazine.com/kritzer_11_15/

Please add any additional thoughts or comments you have about Ancestral Night. We gave this title the codes POL, CUL, ETH, AI, XEN, HDS, PHI, & CATS with an average rating of 4.0.