Comic Delights to Read after Finals 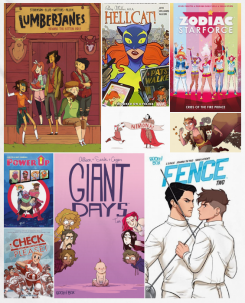 Finals can be stressful. If you could use an hour to shut your brain off and enjoy something for the pure joy of the thing, these comics are just the trick! Every single one of them is chocked full of fluffy goodness that will clear your skin and add three years to your life, gauranteed!

Summary: Eric Bittle may be a former junior figure skating champion, vlogger extraordinaire, and very talented amateur pâtissier, but being a freshman on the Samwell University hockey team is a whole new challenge. It is nothing like co-ed club hockey back in Georgia! First of all? There's checking (anything that hinders the player with possession of the puck, ranging from a stick check all the way to a physical sweep). And then, there is Jack-- his very attractive but moody captain.

Summary: Nicholas, the illegitimate son of a retired fencing champion, is a scrappy fencing wunderkind, and dreams of getting the chance and the training to actually compete. After getting accepted to the prodigious Kings Row private school, Nicholas is thrust into a cut-throat world, and finds himself facing not only his golden-boy half-brother, but the unbeatable, mysterious Seiji Katayama... Through clashes, rivalries, and romance between teammates, Nicholas and the boys of Kings Row will discover there's much more to fencing than just foils and lunges.

Summary: A hilarious peek into freshman year of college from the eyes of three spunky but realistic young women. Susan, Esther, and Daisy have become fast friends during the first few weeks at university. Brash Susan suffers no fools and hopes to take down the patriarchy. Punk/goth Esther can't escape the drama that seems to follow her every move. And sheltered, super-sweet Daisy begins to explore new aspects of herself.

Summary: When all the men in Mancastle get eaten by a dragon, the women take over! Now the blacksmith's wife Merinor is King, Princess Aeve is the Captain, and the only remaining (and least capable) knight Sir Riddick is tasked with teaching the ladies of the castle how to defend against all manner of monsters!

Summary: Jo, April, Mal, Molly and Ripley are five best pals determined to have an awesome summer together...and they’re not gonna let any insane quest or an array of supernatural critters get in their way!

Summary: Nimona is an impulsive young shapeshifter with a knack for villainy. Lord Ballister Blackheart is a villain with a vendetta. As sidekick and supervillain, Nimona and Lord Blackheart are about to wreak some serious havoc. Their mission: prove to the kingdom that Sir Ambrosius Goldenloin and his buddies at the Institution of Law Enforcement and Heroics aren't the heroes everyone thinks they are.

Summary: Patsy Walker has managed to escape her past, her enemies and Hell itself (literally)--but nothing compares to job hunting in New York City! Between trying to make rent and dodging bullets, she barely has time to deal with the popular republication of her mother's exploitative romance comics about Patsy's teenage years, much less their interference with her work and dating life. As she goes from living a double life to living a triple one, what the Hell is Patsy supposed to do? There'll be burgers, monsters and rent checks; old friends like She-Hulk and Valkyrie; and a ghost from the past with questionable motives!

Summary: Eons ago, it was prophesied...four distinguished champions would be chosen to lead the universe into a new age of strength and peace. They were expecting warriors; what they got was a little bit...different. Join Amie, an art student, Sandy, a single mom, Kevin, aging athlete and Silas...a goldfish?...as they learn to navigate Earth and each other as the most unanticipated powerful beings in the universe!

Summary: Wolverine. Deadpool. Doctor Doom. Thanos. There's one hero who's beaten them all, and now she's got her own book! And to celebrate she's set her sights even higher - much higher. We're talking Galactus! But first Doreen Green, aka Squirrel Girl, is starting college, making new friends, eating nuts and kicking butts, not necessarily in that order! Together with her best (human) pal Nancy, and her best (squirrel) pal Tippy-Toe, and armed only with a tail and some foe fact-filled trading cards, she'll take on villains including Kraven the Hunter, Whiplash and, oh, yeah, the Devourer of Worlds!

Summary: They're an elite group of teenage girls with magical powers who have sworn to protect our planet against dark creatures. as long as they can get out of class! Known as the Zodiac Starforce, these high-school girls aren't just combating math tests. They're also battling monsters--not your typical afterschool activity! But when an evil force from another dimension infects team leader Emma, she must work with her team of magically powered friends to save herself--and the world--from the evil Diana and her mean-girl minions!